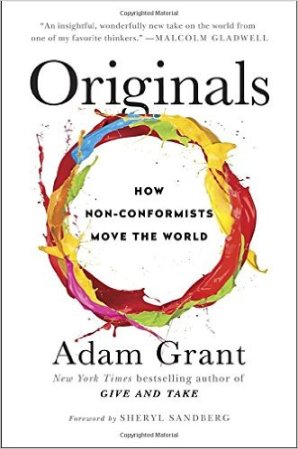 The desire for achievement suppresses original and creative thinking. We often find surface level ways of showing originality, instead of becoming a true original. This is to avoid taking risk that might jeopardize your position in society.

People that became true originals did not always willingly or boldly choose to do so. Creation of new ideas, businesses, and institutions often requires the destruction of others. Creative destruction is the result of original thinking. To be an original, you need to take radical risks.

The best entrepreneurs are not risk takers. Many keep their day jobs for years after starting their own company. They employ barbell strategies to mitigate the risk of a new venture by taking extreme risks in one area while playing it safe in other areas. Being the first mover is not always an advantage.

People tend to be overconfident about their ideas. They also tend to seek out positive and ignore negative feedback. Creative geniuses aren’t necessarily better in their fields, but they tend to produce a much greater volume of work.

Employees who were told to think of their jobs as malleable and brainstorm on how to improve them were found to be much happier and more motivated than those who were not. This can be called vuja de, the opposite of déjà vu. When you see something that’s very familiar to you in a new light, that’s where innovation begins.

The quality of original ideas is proportional to the quantity of ideas produced. People are inherently bad at predicting which ideas will become mainstream. To combat this, come up with a ton of ideas and gather feedback from your target audience.

Managers have a tendency to be risk averse, focusing on the costs, not the potential upside, of an idea. The more experience someone gets in a particular field, the more entrenched they become in the status quo. People with moderate expertise are the most open to radical innovation.

The most creative people are not only experts in their particular fields, but also tend to have an appreciation for the arts, such as literature, art, poetry, or sculpture. Having a breath of knowledge rather than a depth of knowledge seems to enable breakthroughs. Exposure to different cultures and ideas also increases creativity.

Intuition is only useful if you are an expert in that specific domain.  Expertise does not transfer across domains.  Analysis should be used in the place of intuition in a new domain.

Presentation style and personality do not reflect true passion behind an idea. Focus on market pull, not push, of a technology or product.

When pitching a new or novel idea, the audience will be skeptical. The best way to approach this can be to start with the idea’s weaknesses, and systematically working through them. People don’t like sales pitches or persuasion, so doing this turns your pitch into a problem solving discussion.  It will make you sound more knowledgeable and also more trustworthy. Also, presenting a list of negatives makes it harder for the audience to think of other ones, leading them to believe the idea is not as bad as they may have thought.

People find it easier to accept things that they have been exposed to multiple times. As a result, it is best to share your idea multiple times to an audience to increase acceptance. Familiarity breeds comfort. Short exposures are most effective,  and 10 – 20 total exposures have been shown to be beneficial.

The middle of any organization is prone to silencing rebellious voices and new ideas. This is because unlike the bottom, the middle has something to lose and a reputation to uphold. Likewise, unlike the top, the middle is more insecure when it comes to being outspoken.

Women are often punished for speaking up compared to men. This is because of the stereotype that men are dominant and women are communal, and speaking up violates this notion for women (gender role deviance).

The key to influence is to earn status before exercising power.  If you are seen as someone who can get things done, your ideas will be better received.

The best ways to deal with an environment that is not conducive to original thinking are to speak up or to leave. The regrets of most people are errors of omission, not errors of commission. Don’t be afraid to speak up.

Being a first mover is overrated. First movers have been shown to fail more often and earn less profit than those that enter the market later. Being original doesn’t mean being first, it just means being different and better.  Three out of four companies fail because of premature scaling.

Being a first mover is in advantage in arenas where there are patents or strong network effects.  In other domains, there is no consistent advantage, and more disadvantages to outweigh them.

Converted enemies can be more helpful to your cause than Frenemies. Keep your friends close but your enemies closer. Engage adversaries and try to win them over instead of just ignoring them.

Start with something novel or abstract, then add something more familiar in order to inspire original ideas. Novelty adds creativity and innovation, while familiarity adds comfort and increases the chances of adoption.

Tempered radicalness is the key to gaining allies, followers, and funding.

Startup companies that prioritize commitment in new hires versus level of skill or star potential had by far the least chance of failure.  The bigger a company gets however, the harder it is for commitment-based companies to attract a diverse workforce.

Agree on principles in an organization as well as the ranking of each one.

Shapers are independent thinkers. They are curious, non-conformist, and brutally honest. Shapers take risk because their fear of not succeeding is greater than their fear of failing. The greatest shapers, however, create a culture to unleash originality in others.

Pessimism and fear can be a helpful resource toward ensuring your success on a given project assuming that your commitment is strong. Rebrand fear as excitement to increase confidence and persuasiveness, especially in public speaking.

University fundraising was found to be three times more effective when the caller was a beneficiary of a scholarship. This made the appeal for donations much more genuine.

To motivate people to do actions viewed as risky more effectively, it is better to frame the potential losses of not acting rather than the potential gains of action. For safe or obvious actions, it is better to highlight the benefits. This is due to the loss aversion bias. The prospect of a certain loss results in risk taking behavior.  To provoke action, you need to instill a sense of dissatisfaction or frustration with the status quo.

Generate and champion new ideas. Stimulate ideas and build a culture that fosters dissent. Challenge the status quo. Produce more ideas. Learn a new craft to give you a breadth of knowledge. Learn about different cultures. Give ideas time to incubate by procrastinating midway through a brainstorming session. Seek more feedback from peers. Balance your risk by being cautious in domains other than the one you were taking a risk in (keep your day job).  Highlight the objections to your idea. Make your ideas more familiar through multiple exposures. Disguise radical ideas with common values. When you’re committed to a goal, motivate yourself by thinking about the remainder of the task. When your commitment waivers, consider the progress you’ve already made.

Frame your nerves as excitement. Find one ally to increase your motivation to act on an idea. Speaking your mind and/or exiting a bad situation are the only two options you have to improve your circumstances.
Hold an innovation tournament. Send out a call for proposals to solving a particular problem, and have peers evaluate them. Advance only the best ideas and award the winner funding and a team to carry out the vision. Create a sense of urgency by doing a “kill the company” exercise. Invite people from all over the company to pitch ideas. Do entry interviews when bringing on new people to collect new ideas. Un-earth devil’s advocates instead of assigning them. Invite criticism. Emphasize values over rules.